Take a look at Nate Ruess' nationality, net worth, and other interesting facts!

Nate Ruess is a popular American singer and songwriter. He is most well-remembered for being the lead singer of the popular pop band, “Fun” and the popular rock band, “The Format.” Since 2015, he has been working as a solo musician. He has been the recipient of a Grammy Award as a member of the band, Fun for We Are Young.

Nate Ruess has experienced an exciting and successful career, to say the least.

Nate Ruess began his career in 2000 when he formed the band, The Format with his best friend and popular musician, Sam Means.  In 2002, The Format released a five-song EP, titled EP, on the 9th of August 2002, which brought them local recognition. This led them to be signed by Elektra Records in 2002.

Read about the family members and dating life of Nate Ruess.

Running in Central Park is my favorite thing to wake up and do. I have my own specific path that I have to run every single time. There’s a little bit of OCD involved, but I love it. 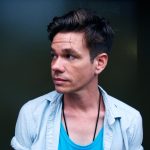 I don’t want to be known for anything other than writing songs.

I feel like the rap metal at the end of the 1990s destroyed rock music for everybody and suddenly everybody felt like they had to apologise for being in rock bands. People suddenly felt bad about wanting to reach massive audiences and the sense of theatre, that we have in our live show, became something to avoid.

I picked up ‘The Hunger Games’ thinking it was written at my regressed reading level. I’ve spent hours reading it, and I’m not even halfway through. Our bass player, whose name is also Nate, ended up reading all three novels and loved them.

We love a good, hyped sound, but when it starts to sound insincere, that’s when I lose interest. I hope that our music, even if it sounds polished, doesn’t sound insincere.